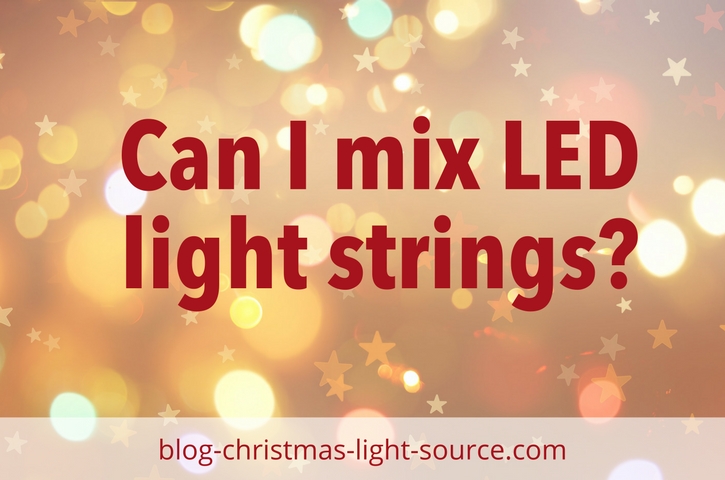 Can I mix up LED light strings?

This is a question from a customer who wants to mix strings of LED – both steady and flashing from multiple vendors including Christmas Light Source together on the same tree. (I realized this after we exchanged emails.)

Hello, is it possible to link these twinkle lights with other 5mm not twinkling LEDs? thanks in advance. – Leon

Hello Leon,
That’s a great question and we’ve been seeing it asked more often.
Short Answer: Do NOT mix LED light strings of different styles, colors or specifications together in a single electrical circuit.
This also includes not mixing LED light strings from different vendors unless the light strings unless they are exactly the same.
LED lights really should only be connected with others of the same style because they can vary widely in current ratings. Connecting different current-rated sets can increase the current load in all the strings and damage sets like ours that are ultra low current/power.
Run your LED lights that are steady-on in a single circuit and your flashing light strings in a second single circuit and plug them into different outlets/female plugs – either at the wall, end of a connector or at a splitter.
All LED light products should also be connected to a surge protector as well.
Hope that helps. Let us know if you have any questions in the comments below.

We love to hear this kind of customer feedback. And we’ll think about expanding this product line! Used this lights on the outside of a company vehicle for a socially distanced Christmas event. They lit Read More