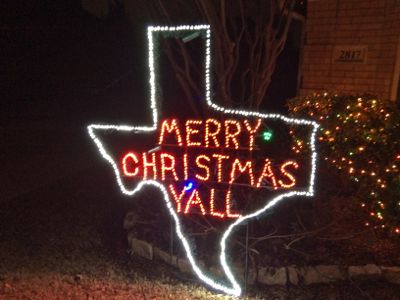 I spoke to Dan up in Flower Mound, Texas when he ordered his lights for his yard sculpture and he kindly sent us a photograph of his project.

We love that it wishes everyone a Merry Christmas in a very Texas kind of way!

We asked him a few questions. (We knew you’d ask and got the answers for you in advance!)

Where did you get your frame?  Did you make that?

How did you make the words?

The words are part of the frame, also welded into place.  Lights are strung to each letter dense enough to show letter and little space.  As you can see some are better than others.

(Many times, the light bulbs are installed “with” or parallel to the frame.  The way Danny has installed the LED lights so they point out at you puts the lights really close to each other and makes a great outline – almost like rope light.)

Did you use wire ties to attach the lights?  Is that extra wire just looped behind the frame that I see in the photo?

I used 4” wire ties to secure each light sometimes I had to use a tie on each side of a light, depending on the lean and twist of the wire.  The wire between each bulb is looped and held snug against the back by the twist of the turn I put on the wire.  Most of the time it works but sometimes it turns a way I would prefer it not so I create space or tightness in the next light or I make it up as I go along.

At each plug in I try to tie it to the other wires in such a way that they are fairly neat.  The hardest part is figuring out how much of each letter is covered by each strand of lights, do you string the top or bottom half of the letter first and how do you make the transition to the row above or below and how can you string those letters.

I looked at the basic frame a long time before I started with the LED’s.  I had to cut many wire ties and rewire runs of what I had already done to make things work sometimes.

Thanks again for your help.

If you’d like to try this at home, may we suggest: 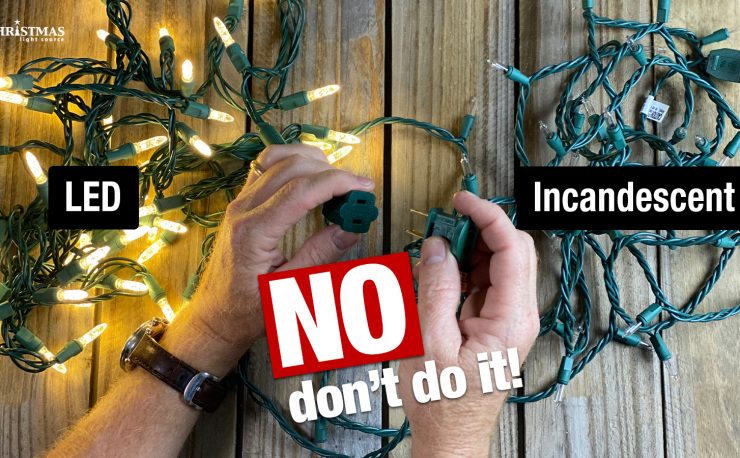 Short Answer: No Longer Answer: This is a common question. We are going to answer it in this post for light strings that are PRE-WIRED. We’ll answer this question for traditional C7/C9 cords that take Read More