Why Are My LED Christmas Lights Flickering?

This blog post also answers the question: What is rectification and why is it important?

Your LED Christmas lights are flickering because they aren’t built with inline rectifiers. These full-wave rectifier circuits (diode bridges) flip the lower half of the input electrical waveform which results in a higher rate of flicker that virtually disappears to the naked eye.

All of the Christmas Light Source LED Light strings are built with a rectifier at the beginning of the string and again at the center of the light set to minimize flicker.

First, the disclaimer. This blog post is not a treatise on electrical power generation and rectification circuitry. We’re publishing this discussion for folks who just want to know that flicker is a “side-effect” of the way their electricity is delivered and how inline rectifiers help reduce headache-inducing flicker on their Christmas trees.

(Constructive comments will always be welcome, it’s been a few years since any of us made a nice, shiny solder joint on a circuit board. But then again, does anyone do that anymore?)

Your Christmas lights flicker because they aren’t traditional incandescent lights that create lights based on heating a small wire element in the presence of an inert gas inside the little glass bulbs. Light from LEDs are generated in a much more complicated way and involve valence bands of energy and lots of science. We’ll explore this in great detail another day when we’re feeling super geeky.

In a nutshell, we can represent the voltage change over time of the AC coming out of your household outlet like this where this is a rough graph of voltage vs. time.

In order to create a DC input waveform to the LED Christmas light string, a cheap string will just clip off the bottom part of the waveform. This is what creates a flickering, choppy light result especially when the light string is moving.

Nicely engineered light strings have a diode bridge that flip the input waveform instead of clipping it off.  LIke this.

You can see that an approximate average of the waveform when the bottom is flipped is much smoother than if you clip off the bottom half of the input.

Which means you have a higher waveform frequency so it’s less visible to the human eye.

At Christmas Light Source, our light strings have full wave rectifiers at the beginning, end and in some strings a third rectifier located in the middle of the light string. This results in very low flicker and a fantastic quality of light. 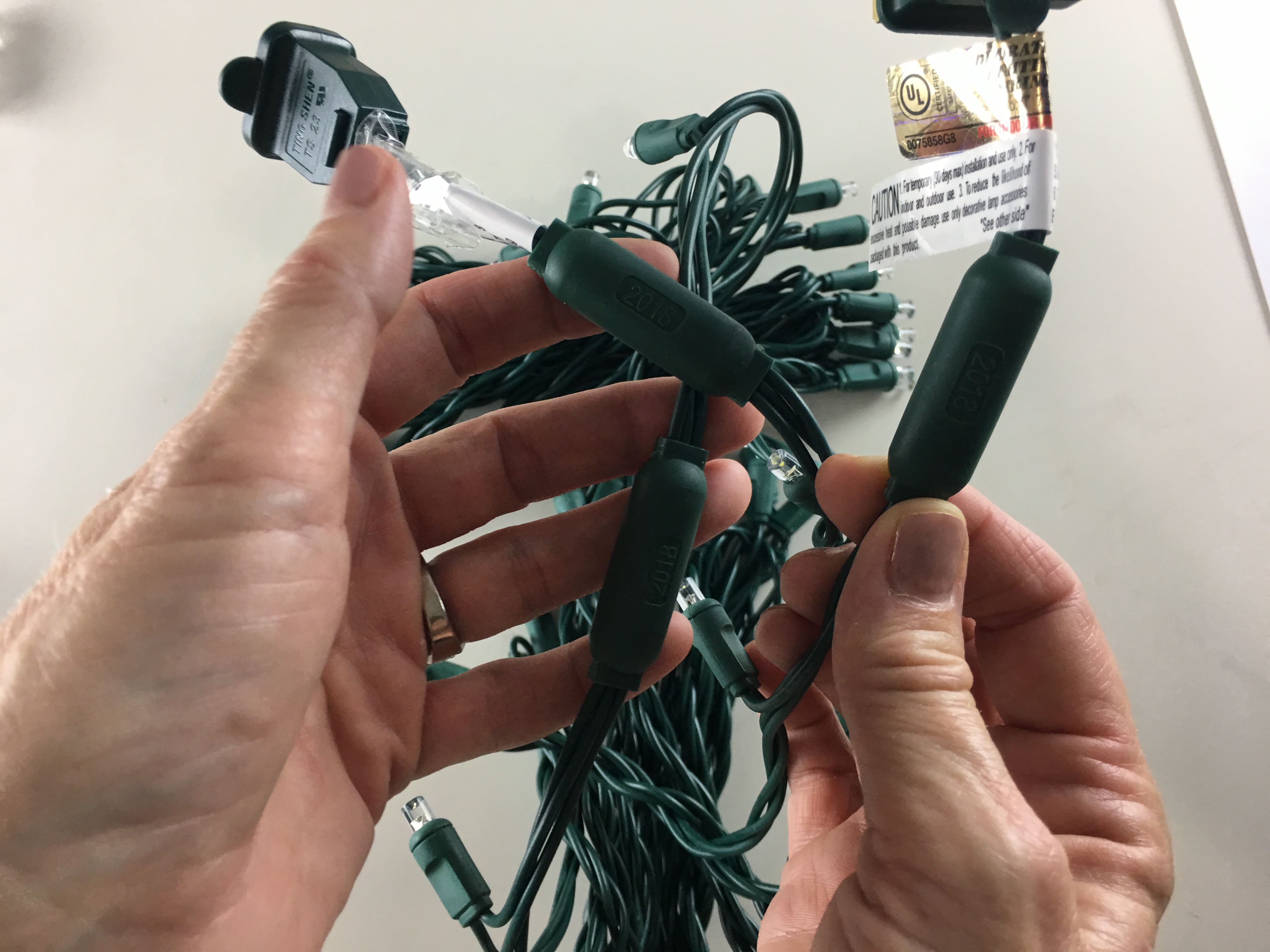 3 thoughts on “Why Are My LED Christmas Lights Flickering?”

We love to hear this kind of customer feedback. And we’ll think about expanding this product line! Used this lights on the outside of a company vehicle for a socially distanced Christmas event. They lit …

A big thank you to Ben who sent us these photos of their first-time Christmas lights installation. Starting with a classic design made the project quick and easy. The traditional color and design leave plenty …

If you live in the Houston area, be sure to head over to the N. Loop 610 & Shepherd Chick-fil-A this season to enjoy their Christmas light display and a #1 meal with fries and …

We love this fantastic display that a Wyoming customer shared with us via Facebook this week. To get the part of the look that does not include the 3D yard art, here is a starting …